skip to main | skip to sidebar

Life has been keeping me extremely busy; I'm sorry for the lack of updates.

I've received some very interesting feedback regarding my previous post, specifically regarding the Fermi energy. When things let up a little bit, I'll expound a bit more on the critical role of the Fermi energy in solid state physics. I was neglecting some critically important information, and the time after the last posting is a great time to do so.

In the next posting, I'll have an aside on the role of the Fermi energy in insulators, semiconductors, and metals. After that, I'll get back on the subject of quantum well and nanostructure calculations.
Posted by Joseph Pingenot at 12:20 PM No comments:

Introduction to the Semiconductor Bandgap

What constitutes a "semiconductor" can be a complicated question when you really dig into it. Indeed, a large chunk if not most of the first class I took dedicated to semiconductor physics was reserved for this. As such, this post won't be nearly as in-depth as that, but instead focus on one vital aspect of semiconductors: their "band gap." 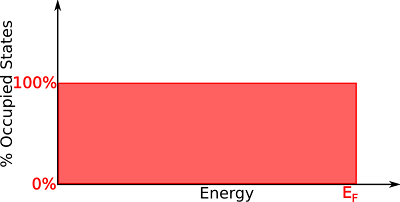 Now for the band gap and how it relates to semiconductors. A special property of semiconductors is that they have a band gap. That is, there is a continuum of states up to a certain energy (the valence band) and at above an energy above this (the conduction band). This is complicated to explain in text; the illustration below is much more straightforward. 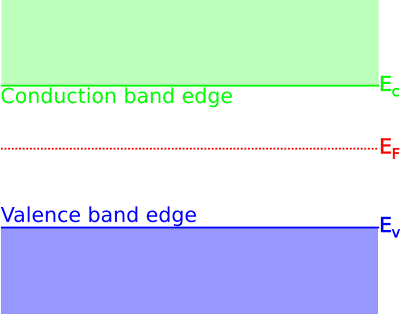 Above the conduction band edge (green above), there are allowed electron states (translucent green). Below the valence band edge (blue below), there are allowed electron states (translucent blue). The white area in the middle is a forbidden region, the band gap. How wide this gap is varies from material to material. In InSb, for example, it's quite small (0.235eV [1]) while in diamond it is quite large (5.48eV [2]).

Since the band gap can be seen as a forbidden region and is dependent upon the material chosen, one may choose a structure composed of a set of materials carefully in order to do useful things. These nanostructures will be the topic of the next blog posting.

Greetings! I've decided to open a blog, since the current crop of blogs seem to have a lack of condensed matter physicists. This will be part of my outreach activities, and I aim to have a steady rate of updates. What that rate is, however, needs to be determined.

I'm currently a postdoctoral researcher at the University of Oklahoma. We're doing work on the Rashba spin-orbit interaction in InSb quantum wells. With the University of Arkansas, we're also working on antiferroelectric ordering in chains of quantum well quantum dots (QWQDs). What this is, precisely, will be the topic of blog posts in the near future, starting from (close to) the ground up.

Do you have any questions you'd like to see addressed in this blog? A condensed matter bent is the topic of this blog, although it's a wide topic and I currently only am fluent with a small part. Basic physics questions are also welcome, however.
Posted by Joseph Pingenot at 8:44 PM No comments:

Joseph Pingenot
I am a postdoctoral researcher at the University of Oklahoma. I'm working with the experimentalists on investigating the Rashba spin-orbit effect in InSb InAlSb quantum wells. In addition, I work with experimentalists at the University of Arkansas on electrons in CdS/CdSe/CdS quantum well quantum dots (QWQD). What this work entails requires an involved explanation, and will be the subject of initial blog postings.